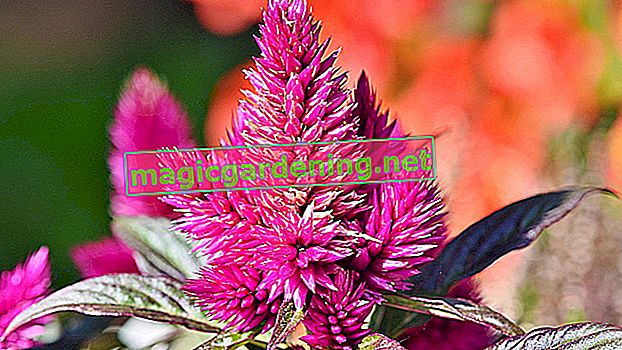 The plume, Celosia argentea, belongs to the genus of the fire creatures within the foxtail family. He has numerous common names such as silver brandschopf, Tausendschön, Hahnenkamm, Sammetblume or Floramoor. Its original range is in the tropical and subtropical regions of Central and South America, Asia and Africa. In China and India the plume is cultivated and used in a similar way to amaranth.

Like all types of fire crab, the plume has a characteristic appearance, which is indicated by the Latin name Celosia. Translated it means "flaming". The perennial forms an unbranched and upright growing shoot. The plume grows comparatively quickly and reaches heights of between 30 and 80 centimeters. Most cultivated forms grow between 20 and 30 centimeters high. The plume is an annual or perennial plant that often becomes woody at the base.

Foliage leaves appear on the shoot, which are divided into leaf blades and stems. The leaves appear lanceolate or oval to triangular. Their edge is smooth. They sit alternately on the stem. When the vegetation phase comes to an end, the dark green leaves change color and glow in attractive autumn tones.

The terminal inflorescences are reminiscent of feathery bushes with a flame-like shape. They are made up of numerous individual flowers that form an ear. They are hermaphroditic and consist of three to five bracts. In the center of the flower there are five stamens that have grown together with the calyx at the base. The stamp is up to four millimeters long, which distinguishes the plume from other types of fire.

The species Celosia argentea develops reddish flowers with silvery nuances. There are now numerous cultivated forms that have expanded the color palette. It ranges from white to yellow and organs to pink and flame red. The flowering period extends from June to September. An inflorescence persists for up to eight weeks.

In Asia, plumes are cultivated as ornamental plants and food. They are used in herbal medicine. In Central Europe the species, their colorful varieties and varieties are used for planting pots. They decorate roof gardens, inner courtyards and top apartment arrangements. In planters, the perennials beautify interiors and balconies, where they are cultivated as an annual. The Celosia can be grown in the room all year round so that it blooms for several years.

In the flower bed, the perennial thrives among other colored flowering plants. Here the perennial is cultivated as an annual. The plume goes well with marigolds and coneflowers. It serves as a gap filler and can be planted in small groups. With its striking inflorescences, the plume looks very dominant. Therefore, it looks good as a soloist in a color-coordinated planter.

The plume can easily be used as an ornamental plant for the nursery or cultivated in households with pets. It is considered non-toxic in all parts of the plant. Its leaves can be prepared in a similar way to spinach. The young shoots provide tasty vegetables that can be seasoned with garlic, hot pepper or chilli. The colorful inflorescences can be used as an edible decoration. The flowers garnish desserts and are a real eye-catcher in ice cubes.

The Hahnenkamm likes conditions that are similar to its tropical home. Young plants without flowers prefer a warm place that is bright and receives a lot of sun. The rays of the sun stimulate the formation of flowers. As soon as they are in full bloom, a partially shaded location is necessary. The plants wither very quickly in the sun. Feather bushes thrive splendidly in a sheltered place. The Celosia prefers high humidity

Normal potting soil is perfect for cultivating feather bushes. For better permeability, you should loosen the soil with sand or perlite. The cockscomb enjoys a nutrient-rich substrate that provides it with sufficient nutrients during flowering.

The seeds are suitable for direct sowing in the bed. Since the plants are very short-lived with this method and die with the cold in autumn, you should prefer the seeds between March and April. Temperatures of 18 to 20 degrees Celsius and a moist growing substrate (€ 9.05 at Amazon *) on which the seeds are spread are suitable for this. The light germs are not covered with earth. They need high humidity to germinate. The seeds show tiny cotyledons after one to two weeks.

The ideal conditions for growing from seeds are found in a mini greenhouse (€ 6.96 at Amazon *) for the windowsill. Provide adequate ventilation every day. Once the young plants have reached a few centimeters, they can be placed individually in plant pots. After the ice saints, they are planted in the bed.

As a container plant, the plume feels particularly comfortable on the balcony if it has a warm and bright spot right next to the house wall. Make sure that no waterlogging forms in the pot. Before you put the plant outside, you should wait for the last late frosts. Since they cannot tolerate cold feet, the buckets should be placed on a wooden board.

The Hahnenkamm has a moderate water requirement. It needs an evenly moist substrate so that it doesn't let its leaves droop. The root ball must not dry out. Make sure you have a regular water supply, which is more abundant in the hot summer months. With the thumb test you can check the moisture content in the substrate. Water the plant at the base to prevent water from running over the leaves. If water collects in the coaster, you should drain it off. Spray the leaves daily to increase the humidity.

Freshly bought plants do not have to be fertilized in the first time, as the soil has been enriched with nutrients. If the plume is in the same pot for a longer period of time, it enjoys a supply of nutrients every four weeks. Give the plant a liquid fertilizer over the irrigation water. Make sure you dose it sparingly, as the plant can quickly become over-fertilized. This makes them more susceptible to disease and the flowers are less abundant.

The plume does not require any cutting measures. If you regularly remove withered inflorescences, you can stimulate the re-flowering and thus extend the flowering period.

How to prevent infection:

When moving the plant, you must be careful not to damage the roots as much as possible. The plume is sensitive to changes in the substrate. Container plants that are cultivated for several years should only be repotted every two to three years. Perennials growing in the bed die after one vegetation period due to the cold, so that transplanting is unnecessary.

The plume is not hardy. Outdoor perennials die in autumn, while potted plants can be overwintered. As soon as the temperatures drop below ten degrees Celsius, the pot should be moved to winter quarters. This can be a greenhouse or the living room. The plants are overwintered at room temperature. During the winter months, the plants need less water. The root ball should not dry out. Fertilization is not necessary until spring.

The plume is often attacked by aphids. They prefer to sit down on weakened plants and suck sap from the leaf veins. The leaves turn yellow and die off if severely damaged. Various home remedies can be used to combat the pests. A brew of garlic, onion or nettle is regularly sprayed on the leaves. You can treat the plant with an extract from old coffee grounds. Sprinkle a few teaspoons of coffee grounds on the substrate to prevent pest infestation

This fungus develops a floury coating with a white or grayish tinge that covers the leaves of the cockscomb. When ripe, small, dark points can be seen in the topping. This fair weather mushroom spreads its spores and dry and warm conditions.

The mold spores prefer to settle on putrid parts of plants. Rotten roots or shoots offer the spores optimal growth conditions. The formation of rot is favored if the substrate is excessively moist. When watering, make sure that the water runs off and that no waterlogging occurs.

If the plant shows growth disorders or discolored leaves, it should be stripped of the substrate and checked for signs of rot. For most varieties, control measures are not worthwhile because they are cultivated as an annual. Perennial plants should be placed in fresh substrate after the rotten roots have been removed.

Colorful arrangements can be created with the plume. Plant different colored varieties in a sufficiently large flower box. (€ 13.18 at Amazon *) The opened flowers can be dried and used to embellish flower arrangements or dry bouquets.