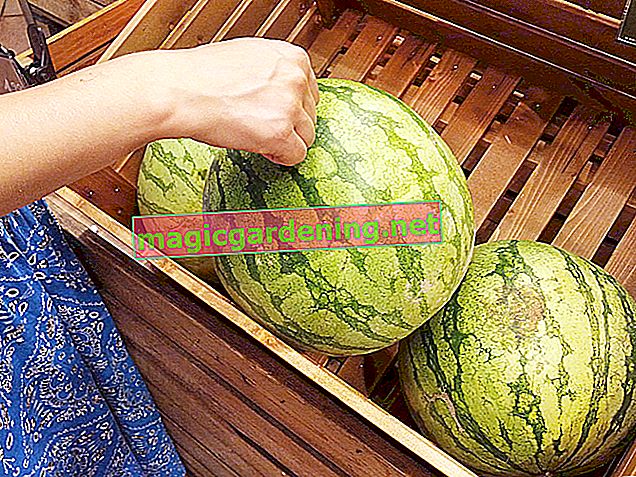 In this country, watermelons usually come from the following countries during the main season:

Due to the weight of watermelons and their relative shelf life, the fruits are usually harvested ripe and then transported to us by land. This time, however, reduces the remaining time that a watermelon can be kept at home. You can tell that a watermelon is fully ripe by a yellow-colored contact point and by a muffled sound when you knock on it. From this point on, you shouldn't store the fruits for longer than one to two weeks at room temperature, if possible.

Keep watermelons in the refrigerator

Preserving watermelons for a long time

If you harvest larger quantities of watermelons from your own garden or if you have the rest of a watermelon left over from fresh consumption, you can also pickle the pulp. To do this, the watermelon is cut into small cubes and the seeds are carefully removed. After boiling in a salty brew with spices, the watermelon can then be pickled in a mixture of vinegar and lime juice, so that it can later be eaten like a spicy vegetable side dish.

When chopping a watermelon, make sure you have a clean surface and a hygienically cleaned knife if you want to keep the rest of it longer. Otherwise, accidentally applied germs can multiply in the refrigerator and lead to the melon spoiling more quickly.