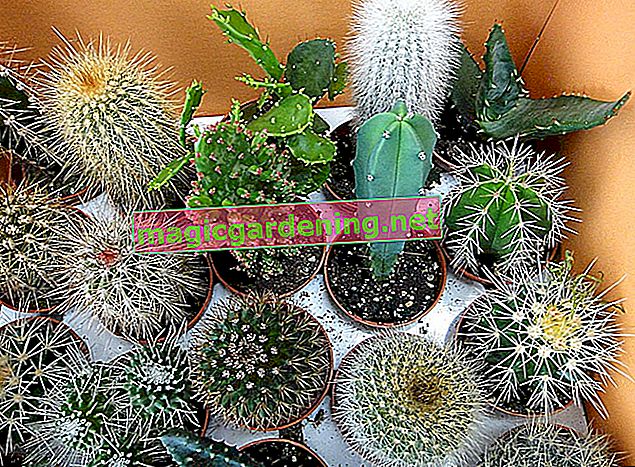 The preparation phase starts in September

If your cacti have spent the summer on the balcony, the falling temperatures in September require a move to the windowsill. In preparation for the upcoming winter season, the succulents only make a stop here. From this point on, gradually reduce the water supply, because the goal is a dry winter. Furthermore, the cacti receive some liquid fertilizer for the last time in early / mid-September.

Instructions for a successful hibernation - that's what matters

The hot phase of winter dormancy begins at the end of October / beginning of November when it becomes cool and dry for your cacti. This is how you guide the exotic succulents through the dark season:

Under these conditions, your cacti will spend the winter time until the end of February / beginning of March. The bright, unheated bedroom is ideally suited as winter quarters. At temperatures around 5 degrees Celsius, the plants are satisfied with a window seat in the basement.

No rule without exception

Winter-blooming leaf cacti such as Rhipsalidopsis or Schlumberga are an exception to this rule. For these beauties, the hibernation begins after the flowering period and extends from January to February.

In March, cacti take their traditional place on the windowsill again. A gentle spray of soft, lukewarm water now awakens the spirits. A week later, the starting signal for the normal care program is given by watering the cacti again for the first time and adding some cactus fertilizer to the water.

Hardy cacti in the bed also undergo preparation so that they can stand up to frost and snow. For this purpose, they will no longer be watered and fertilized from October. Before this, a potassium fertilizer strengthens the frost resistance because the nutrient lowers the freezing point in the cell water. It makes sense to have a translucent rain canopy to protect against rain, hail and snow.