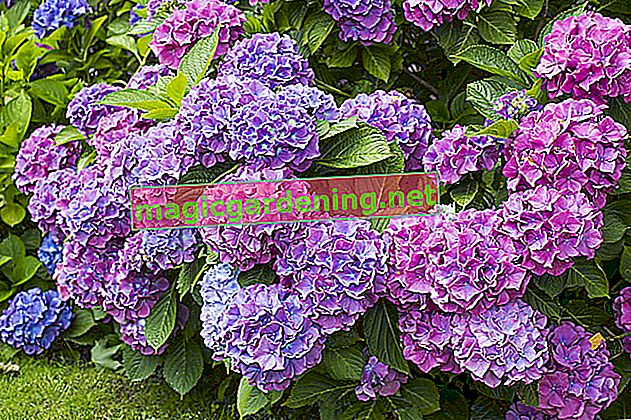 If you want to grow hydrangeas yourself in this way, you need to cut cuttings about 15 centimeters long from the hydrangea in June or July. Make sure that the mother plant thrives vigorously and bears plenty of flowers, because it will pass these properties on to its offspring. Only cut shoots from annual but mature wood, as these form roots without problems.

Preparation of the cuttings:

In this way, you can cut several shoots from a longer branch of the hydrangea and require relatively little plant material to make several cuttings.

Introduction of the saplings

Fruit bowls made of plastic, which have slots or holes in the lower area to avoid waterlogging, are ideal as growing containers. Fill this with coconut soil or potting soil. Coconut soil is preferred because its porous structure keeps it very loose, so that the delicate roots can penetrate the material well.

Insert the cuttings about two inches deep into the substrate, being careful not to let the leaves touch each other. This is necessary so that the air can circulate well, because hydrangea cuttings quickly start to mold in high humidity. Press the soil lightly so that the saplings have a good grip and water the sprouts.

Now make a small greenhouse by putting a transparent plastic bag over the growing vessel. It is important to regularly provide fresh air in the next few weeks and to ventilate the foil house at least once or twice a day.

It is also important to always place the cuttings in a shady place. The tender plants burn as soon as they are exposed to direct sunlight for a long time.

The saplings of the hydrangea need a lot of nutrients to thrive. You can recognize a lack of nutrients by the fact that the leaves only turn light green. However, fertilize only very sparingly, because too much fertilizer is just as harmful as too little. The easiest to use is special hydrangea liquid fertilizer, which you add to the watering water in half the prescribed dosage.

As soon as the plants have formed small root balls, you can transfer them to flower pots. Continue to care for the hydrangeas indoors for the first year. In the second year, slowly get used to the changed conditions in the garden before you plant the hydrangea in the flowerbed.

If you want to grow a hydrangea yourself, this is the easiest method. All you need is:

Choose a long shoot in the lower part of the mother plant and gently push it to the ground. Dig a small hole at the point where it touches the ground. Lower the branch into the recess and cover it centrally with soil. Complain the point with the stone.

In the next gardening season, you can carefully dig up the sinker with a spade and separate it from the mother plant. We recommend cultivating the young plant for a year in a sufficiently large pot so that dense and strong roots form. In the following spring you can put the hydrangea in the bed, where it will grow quickly and, with a little luck, will produce the first flowers in the same year.

Random multiplication in a glass of water

Hydrangeas are popular cut flowers that last exceptionally long in the vase. Often they are already forming roots here. If you transplant these saplings into a container in which you have filled potting soil, a small hydrangea will grow out of the former vase jewelry, which in most cases will bloom as early as the next year.

You can carefully divide hydrangeas that are particularly wide and not too tall. At the edge of the mother plant, cut off part of the bush with a spade and transplant it to the desired location. Mulch the hydrangea well and water the plant regularly so that the plant takes root quickly.

Hydrangeas take some time to develop roots, so please don't lose patience while growing them. In our experience, it can take up to eight weeks for the saplings to form a small root ball.