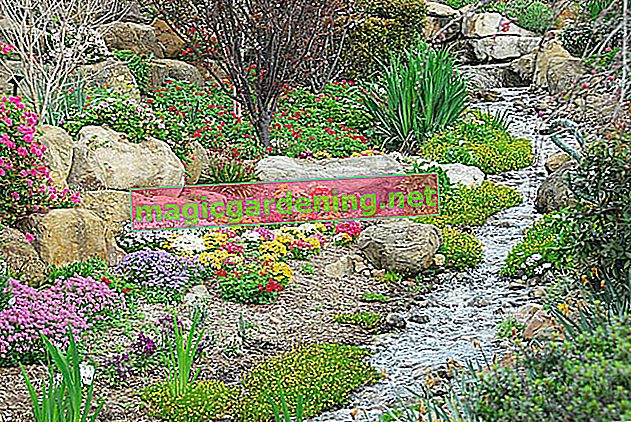 High mountain plants have to adapt to extremely adverse living conditions. In order to protect themselves from the harsh winds at high altitudes, most of the plants have dwarfed or, like the silver arum (Dryas octopetala), have developed into carpets lying flat on the ground or on rock. Other species such as the Swiss man's shield (Androsace helvetica) nestle in narrow crevices in the rock, where they form dense cushions in a confined space.

Which place in the garden is suitable for creating a rock garden?

Most rock garden plants feel very comfortable in a sunny south-east, south or south-west position, provided that there is shade around midday (e.g. by cleverly positioning large stones or trees). On the other hand, locations under larger trees or other woody plants are unsuitable, as the necessary sunlight is missing here and the plants, which are very sensitive to moisture and moisture, cannot dry off quickly enough after a downpour. But be careful: there are some rock garden plants that are particularly comfortable in the shade. Many ferns fall into this category.

There are so many ways to create a rock garden. In order to create the necessary gradient, embankments (e.g. from the excavation of a garden pond or artificial stream) can be carried out and designed accordingly or dry stone walls built. A small trough garden, on the other hand, can even be set up where there is actually no space for a garden: for example on the balcony or terrace.

A natural rock garden is modeled on the high mountain landscape and looks as if you had set a piece of the mountains in your own garden. A combination of a stream or a pond with a rock garden is also very nice to look at. The opposite of this natural is the architectural rock garden, whereby the builder moves away from the natural model of a rocky landscape. Instead, in terms of design, the rock garden is shaped more in the form of a sculpture or the like. This effect is achieved through the use of exposed aggregate concrete slabs or fragments thereof, roof tiles, basalt columns, etc. The so-called sunken garden, in which the planting takes place between one or more dry stone walls, is also very interesting to see.

Which types of stone are suitable for the rock garden?

In the rock garden, limestone such as Jura limestone, shell limestone, tuberous stones or tufa as well as typical silicate stones such as granite, slate or lava rock are used. However, you cannot plant the various types of rock as you wish, because the majority of rock plants specialize in one of the two rock groups. Plants that flee from lime, such as the prickly nut or the Adonis rose, planted in limestone would inevitably perish.

How to build your own rock garden

Before you can start piling up the stones and planting, you must first prepare the intended planting site. This includes not only pulling up existing weeds - especially root weeds such as thistles, bindweed, couch grass and groundweed - but also digging them up. These weeds develop long roots from which they can grow back again and again and quickly take over. When the planting site is finally prepared, excavate the subsoil and install drainage. Laying drainage pipes is especially important in heavy clay soils to prevent waterlogging - rock garden plants are used to dry substrates and would quickly die if they were waterlogged.

Here you will find instructions on how to build the rock garden yourself:

When installing the stones, make sure that they are securely in place, ie that no stone should wobble. If necessary, put some earth or split under the stone at the wobbly edges.

Rock garden soil should above all have good drainage properties. Compost soil with its high nutrient content is unsuitable because the rock garden plants are used to poor soil and therefore only need small amounts of nutrients.

Suitable plants for the rock garden

The rock garden plants suitable for our Central European climate come from the high mountain regions of the northern and southern hemisphere, with the exception of Australia and Antarctica. The climates are amazingly similar: they are characterized by strong winds and long winters and short summers.

In order to protect themselves from strong winds and excessive cold, cushion plants do not allow their shoots to grow in length so that their leaves lie directly on top of each other. Suitable types are, for example:

Most perennials and almost all grasses have a clumpy habit, ie the new shoots that form year after year are attached to the older shoots in a circle or growing in one direction. They form dense bushes. Species suitable for the rock garden include grasses such as

For the planting of dry stone walls and the gaps between the stone slabs of paths and stairs, debris colonists are suitable, who pull through the rock debris with their long shoots. Typical representatives of this group are:

If you want to cultivate mountain plants that are difficult to care for, you can build an alpine greenhouse. Plants can grow here that are only partially hardy in our latitudes. This includes plants from the New Zealand Alps, for example.