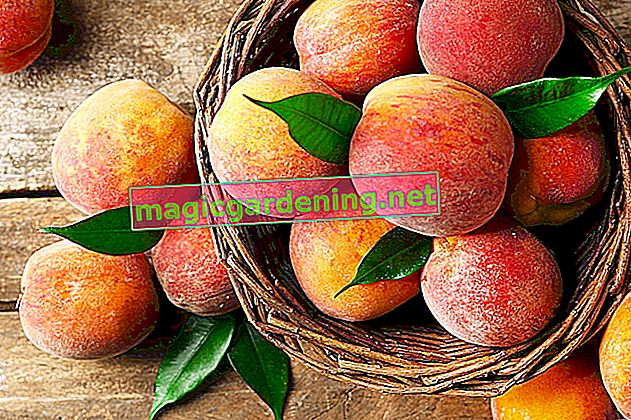 Peaches are classified according to the color of their pulp

Peaches are mainly distinguished by the color of their pulp: there are white, yellow, red and red-fibered peaches. The dark red, very distinctive looking vineyard peaches actually have white flesh that is streaked with red. Every peach has its own taste and fans. Some people find the white peaches tastier, others the yellow - it's all a matter of taste. However, anyone who tries a typical vineyard peach will be disappointed at first. This type of peach tastes much more tart than others, it lacks the classic sweetness. On the other hand, vineyard peaches are particularly aromatic in compote, in jam or as a liqueur.

Varieties with high resistance to frizziness

Anyone who grows peaches is familiar with this problem: sooner or later, the curl disease affects almost every peach tree. Treatment and containment are difficult, so planting a variety of peach that is highly resilient is recommended. Although these peach tree varieties are also attacked, the consequences are often only marginal. Some old peaches show a certain resistance to the curl disease, but also special newer varieties.

Which peach tree varieties have a low susceptibility to curl disease?

Basically, there is no such thing as a really resistant variety, only less susceptible ones. In addition, white-fleshed peaches seem to be much more robust than yellow-fleshed peaches. An exception to this rule is the Suncrest variety

Differentiation according to harvest time

Furthermore, peaches are differentiated according to their time of ripening, with the main season for the sweet fruits being in August. The later a peach ripens, the less suitable it is for northern locations. Vineyard peaches, for example, are ready to eat from mid-September and would not ripen north of the wine-growing climate. In addition, the later the variety becomes ripe, the easier it is to remove the pulp from the stone. Many late-ripening varieties also flower very early. One of the earliest varieties is the old American peach variety Amsden, which can be harvested from the end of July.

If you want to grow a small peach tree yourself from a seed core, it is better to choose genuine varieties for this purpose. A tree would also grow from the kernels of other varieties, but this does not necessarily have to belong to the same species as the mother plant. So to avoid surprises, grow your own peach tree

The varieties mentioned are also very robust and are well suited for gardening.

Peaches can also be cultivated well in the tub, but not all varieties are suitable for this. The dwarf Rubira variety is recommended for keeping pots.