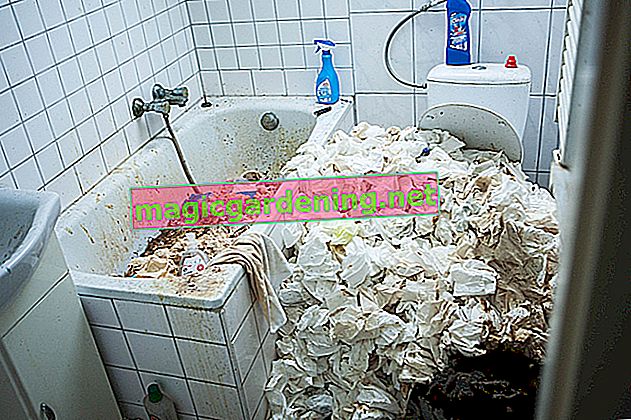 Can the house spider bite?

The house corner spider (Tegenaria domestica), also known as the “cellar spider” or “house spider” because of its preferred habitat, is a source of fear for many people because of its sheer size. The actual body is relatively small at around one centimeter in length, but the long legs can reach a span of up to ten centimeters. The animals are light to dark brown in color, they are lighter after moulting and then darken.

The shy animals are mainly to be found where they find dark and hard-to-reach places for their net. House spiders mainly settle in basements, barns, sheds and attics, where they lay their webs, especially in cavities and behind cupboards. In summer the species can also be found outdoors, there again in protected places such as walls or piles of stones.

Angular spiders can bite and penetrate human skin with their pincers. However, it is seldom and unlikely that it actually comes to this: The animals only bite when they feel attacked and see no way to escape. It only becomes problematic if, for example, the spiders appear in the bedroom and get into bed at night. Here, movements of the sleeping person can lead to the spider getting under parts of the body or under the bedspread and biting there in panic. House angular spiders - like all spiders, by the way - release a poison when they bite, but this is only poisonous for prey. However, the poison has no effect on humans. Symptoms of poisoning reported on some sites and in forums and necrotic wounds that do not heal well after a spider bite are usually due to a bacterial infection. Like all wild animals, the house spider also carries bacteria that are transmitted when bitten and can cause skin infections that are as painful as they are protracted. However, this happens very rarely. Furthermore, in rare cases, allergic reactions can occur after repeated spider bites.

What symptoms can appear after a bite?

You will probably feel the bite itself like a pinprick: it is painful, but not as much as that of a bee or wasp. Local reddening and slight swelling can then appear, which in turn disappear after a few hours. A painful reddening that spreads over a large area, severe swelling and heat radiating from the wound, on the other hand, are clear indications of a bacterial infection that must be treated by a doctor. Allergic symptoms also show up in a very similar way. In these cases, circulatory problems (e.g. dizziness), problems with balance, rapid heartbeat and / or headaches may also occur. But as I said, these complications rarely occur, so you shouldn't panic right away.

How should you treat a spider bite?

Instead, you should cool the bite site and possibly coat it with a cooling gel (e.g. Fenistil). For example, are suitable for cooling A fresh, sliced ​​onion, placed with the cut surface on the wound, provides relief. Onions also contain antibacterial substances that help prevent inflammation. On the other hand, do you have an aloe vera plant at home? Cut off a piece, divide it and place the moist inside on the wound.

But not only cold, warmth also helps against a spider bite. An electronic sting healer not only helps against spider bites, but also against bites and stings from numerous insects and is therefore a sensible investment.

Never scratch a spider bite to prevent dangerous bacteria from getting into the wound and igniting it. If this is difficult for you, you can also put a plaster on the bite site.

Which spiders can still bite?

First of all: spiders actually only bite very rarely and only when they can no longer see any other way out. In addition, the biting tools of most native species are not strong enough to penetrate human skin.

This video provides an overview of the most common spider species in Germany:

Are there dangerous poisonous spiders in Germany?

There are no really dangerous poison spiders in Germany. The wet nurse's thorn finger, the water spider and the cross spider are considered “poisonous”, although the bite of the species mentioned rarely requires medical treatment. In the course of global warming, however, more and more poisonous species are migrating from the Mediterranean countries as well as from other countries, most of which spread over southern Germany. It cannot be ruled out that there may be an increased occurrence of really poisonous spiders here in the future.

Get rid of house angle spider and avoid bites

"Spiders are useful animals, they keep mosquitos and other cattle away from us."

Spiders are very useful animals that keep mosquitoes and other annoying insects away in your home. However, many people are terrified of spiders and would like to get rid of them. Many resort to brutal means such as the vacuum cleaner (with which the animals are sucked away) or hairspray, which is sprayed on the spiders and sticks them together. Both remedies are of course very effective, but not particularly animal-friendly: the spiders die in a very painful way.

If you dare, it is better to catch the animals with a glass, close the opening with a sheet of paper and release the spider outside again. In doing so, you are not only doing something good for the spider, but also for nature in general: With the drastic death of insects in recent years, arachnids have also declined significantly, so that some species are now endangered.

What really helps against house spiders

In addition to the tried and tested glass and cardboard trick, there are other methods of keeping the house spider out of the apartment:

Beware, spiders in the apartment! 🕷 You can see in the video what you can do against the unwanted guests. #spider #spinnen #hauswinkelspinne #tippsundtricks #tipps #tipp #spinnennetz #hausmittel #duft

Grandmothers like to recommend strongly scented remedies such as lemon, lavender, eucalyptus, peppermint or vinegar to ward off spiders. The remedies should be filled into a spray bottle and sprayed either directly onto the spider itself or into corners of the room that spiders like to frequent. The benefits, however, are controversial: Studies have shown, for example, that cross spiders in particular don't care much about such smells and are not impressed by them. However, this may not apply to all species of spider, especially since a clean and tidy apartment is the best prophylaxis.

How old do house spiders get?

House spiders can live up to six years old if the conditions are good (and if no one can tackle them beforehand with a vacuum cleaner or hairspray). But that is a real spider Methuselah who reaches this age. Most specimens are only between two and three years old, with many falling victim to another predator or to humans.

House angle spiders can run very quickly, but so far they have rarely been seen jumping. Even if it cannot be ruled out with certainty that house corner spiders cannot jump: Such behavior is definitely not typical for this spider species.

Do house spiders have natural enemies?

If all means do not help, you can also use an anti-spider spray. However, this should not be used in the apartment or the apartment should then be vigorously ventilated.