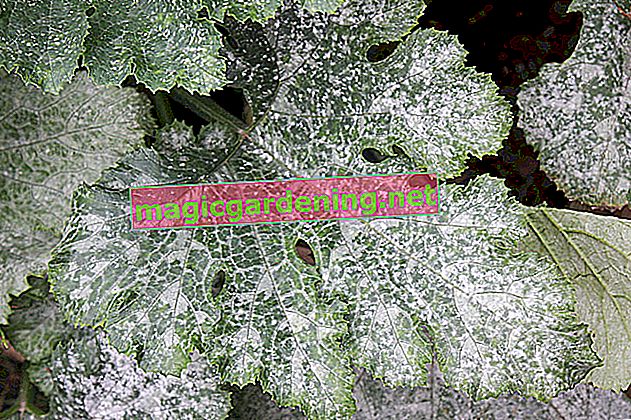 There are basically two different types of powdery mildew, each of which is a plant disease caused by fungi. Powdery mildew is particularly common in wine and can be easily recognized by the typical, wipeable coating. Powdery mildew is more specialized in certain types of plants than downy mildew. The diseases are not only a major problem in commercial, but also in hobby viticulture, as they have a significant impact on plant health and the harvest. Downy mildew is also known as “bad weather fungus” because it already appears from temperatures of 11 ° C and after prolonged rainfall or in damp weather. The fungal pathogen Plasmopara viticola is transmitted by rain and can easily penetrate damp leaves. The fungus does not feed on the nutrients given off by the plant, but rather directly attacks the cells. An infection typically shows up in early spring. You can recognize downy mildew by these symptoms:

Grapes affected by downy mildew are no longer edible. The disease is also highly contagious. If you think that your vines are safe from powdery mildew when the weather is nice and dry, you are unfortunately mistaken. Powdery mildew, also known as "fair weather mushroom", occurs primarily at temperatures between 20 and 27 ° C and in sunshine. However, the Erysiphe necator pathogen, which belongs to the hose fungus, also tolerates midsummer weather conditions with more than 35 degrees Celsius and - in the case of an infection from the previous year - can already appear in spring from 7 ° C. You can recognize an infection by these symptoms:

Grapes infected with powdery mildew become hard, turn gray to black and, due to their unpleasant taste, are no longer edible. It can also no longer be used for the production of juice or wine, as the bitter aroma has a negative impact on the quality of the drink.

Which types of wine are particularly sensitive to powdery mildew?

Basically, all traditional types of wine are endangered by both real and downy mildew. This applies above all to popular varieties such as Chardonnay, Silvaner, Müller Thürgau, Portugieser, Muskateller, Trollinger and Scheurebe. The various types of mildew can be combated very well with well-known home remedies, at least in the early stages, but later these do not help. You should definitely remove the infected leaves and other parts of the plant with sharp scissors or something similar to prevent further spread. Under no circumstances should you dispose of the clippings on the compost, but rather with household waste. If the vine is already heavily infested, often only a drastic pruning far into the healthy wood will help. Only then does the treatment with sprays take place.

"Nature has the right antidote for every problem - without any toxic chemicals."

If you want to harvest the grapes from your own vine and eat or process them without fear of poisoning, the use of tried and tested home remedies is recommended. However, these no longer help once the disease has progressed. That is why the regular inspection of grapevines and the associated early detection of diseases is so important.

Fresh whole milk (preferably raw milk!) Is a good spray that can be used both preventively and in the early stages, primarily against powdery mildew. Certain bacterial cultures in milk are effective, which is why you should never use low-fat or heavily treated milk - this simply does not help. That's how it works: A solution made from baking powder is also an effective remedy for powdery mildew and is effective against this fungal disease. Proceed as follows:

Spray preferably in the evening, otherwise the solution can react with sunlight and leave unsightly stains on the vine leaves.

Can you use any baking powder against powdery mildew?

But be careful: Not every baking powder is suitable for the treatment of grapevines infected with powdery mildew. The baking soda contained only in some varieties is effective, which is why you can use pure baking soda or emperor soda instead of baking powder (which usually contains no baking soda at all).

Plant stock or liquid manure (these ferment for a period of seven to ten days) are also very suitable for preventive spraying or treatment in the early stages. Use field horsetail or marsh horsetail, garlic or tansy for this. How to make the brew:

However, plant manure, especially from field horsetail, is more effective, albeit a little more time-consuming to produce. This is particularly rich in the effective silica.

In addition to the biological sprays mentioned, you can also buy special antidotes in stores. These are mostly based on the fungicidal effect of the metal copper and can also be used in the event of a stronger infestation. Pesticides containing copper are also permitted in organic farming, but are still toxic due to their high concentration. To be successful in fighting powdery mildew infection, you need to start treatment as early as possible. In the case of grapevines, this means spraying preventively from the first shoot in early spring and at regular intervals. You can also use biological sprays, for example plant manure that you have made yourself. Proper planting and care is also critical to the health of the vines. Therefore, pay particular attention to these notes:

In addition, it is extremely important to pay attention to a balanced fertilization. An excessive supply of nitrogen in particular acts like a breeding ground for powdery mildew fungi.

The best way to fight powdery mildew, however, is to grow more or less resistant grape varieties. “Resistant” does not mean that the variety in question is completely insensitive to the pathogen, but rather that an infection is less likely. In the last few years the variety “Regent” has stood out in this regard, which is why it is still recommended. However, it is precisely this variety that is now losing its resistance, which is why you should perhaps opt for one of the following varieties:

Newer American grape varieties are also often resistant to powdery mildew, but less suitable for cultivation in Germany due to the different climates.

Can you eat grapes infected with powdery mildew?

As long as only the leaves or shoots of the vine are attacked with powdery mildew, the grapes remain edible. It only becomes problematic when the grapes themselves are coated with the mushrooms: In this case, they are no longer suitable for fresh consumption or for further processing. This is not only due to the unpleasant change in aroma, but also to the fact that the grapes dry up and develop a hard, leather-like skin.

How harmful is powdery mildew to humans?

In fact, powdery mildew is toxic to humans too. The fungus is particularly dangerous for people who suffer from a penicillin allergy - they can suffer strong allergic reactions from eating plant parts that have been infected with powdery mildew. For this reason alone, you should refrain from eating grapes with mildew.

Some beneficial insects such as sawfly or ladybird actually eat powdery mildew, which is why you can use them to help fight the disease in the garden.