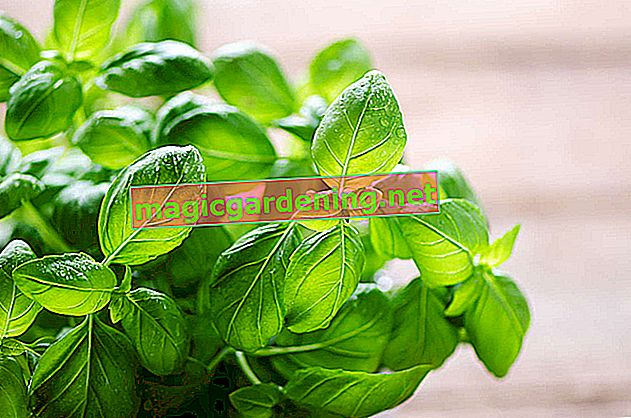 The Greek word “kymbos” means something like “punt” or “boat” and refers to the punt-like, arched flower lips of the approximately 70 different species of orchid genus Cymbidium. The German name “Kahnorchidee” for this attractive, but not entirely uncomplicated room orchid refers to its characteristically shaped, very large flowers that bloom in numerous colors.

The Cymbidium orchids have their home in the forests of Asia, where they are widespread between northern India and Vietnam - some species even grow wild in Australia and Indonesia. In the trade, mainly hybrid forms are available, which remain smaller and more compact than the wild species that grow up to one meter high. Cymbidium orchids come in many shapes and colors, but they are best cultivated in winter gardens that are at a moderate temperature and have plenty of space and light. These orchids are rather unsuitable for the windowsill due to their special requirements in terms of temperature and humidity.

The wild forms of the Cymbidium orchids can be up to a meter high and quite expansive. Some of the hybrids available in this country - these are crosses of different species - reach stately sizes. Note that the flower stalks of the plants can still clearly exceed the given meter measure. Those who do not have that much space, however, opt for so-called mini cymbidiums, which remain significantly smaller with heights of between 15 and 25 centimeters.

Since all Cymbidium orchids are epiphytes, they only develop short rhizomes. From these the long, strong shoots sprout. In addition, bulbous thickenings sit in the lower area of ​​the plants, which are pseudobulbs. These develop from the rhizomes and are used to store water and nutrients. The bulbous, usually egg-shaped to elliptical shaped bulbs should always be covered with suitable orchid soil.

The strong green, narrow leaves usually grow overhanging and can be up to 100 centimeters long, depending on the species. The number of leaves also depends on the specific Cymbidium species: some of these orchids only develop a few leaves, while others develop very many.

Cymbidium orchids typically bloom between November and February and can develop up to 35 flowers per plant, each with a diameter of up to 13 centimeters. However, it takes some effort to get the demanding plants to bloom, as they need strong differences between day and night in terms of temperature from summer to autumn. In their homeland it is up to 30 ° C during the day, but the temperatures drop to around 15 ° C at night.

At home, you would have to adjust these conditions to be able to enjoy the two to three months of blooming. This means: temperature the location in summer and autumn as warmly as possible up to 30 ° C, while it can only be around 15 ° C at night. On the other hand, during the winter flowering season, you should cultivate Cymbidium orchids in a rather cool place at 15 to 18 ° C. At the same time, the humidity should be kept high at around 60 to 80%.

Cymbidium orchids are available in a wide variety of colors. The flowers at the end of the long pedicels can be white, yellow, orange, pink, red, purple, brown or even multicolored. For example, varieties with large, speckled flower colors are particularly pretty.

The Kahn orchid is considered non-toxic. According to the current state of knowledge, no indications of any incompatibilities are known.

As typical forest plants protected by a canopy, Cymbidium orchids need a bright, but not directly sunny location. The blazing midday sun in particular must be avoided at all costs, whereas the morning and / or evening sun is good for the plants. Much more important, however, is the right room temperature: during the day it can get really warm in summer, while at night, cymbidiums need cool temperatures between eight and a maximum of 15 ° C. Cool temperatures are also important during the flowering period, so it is best to overwinter these orchids in an unheated or only slightly heated room.

Between May and September, cymbidiums also feel very comfortable in the fresh air, as long as they are protected from direct sunlight and rain at their location in the garden or on the balcony.

In contrast to the large-flowered cymbidiums, the mini-forms can also be cultivated on the windowsill, as long as you lower the temperatures to approx.

Cultivate your Cymbidium orchids either in commercially available orchid soil, as is also used for butterfly orchids (Phalaenopsis). Alternatively you can also use your own mixture of pine or pine bark, sphagnum (do not collect it yourself!) And peat.

Also keep in mind that conventional, pre-fertilized potting soil or potting soil is not suitable for growing orchids. As epiphytes, they have little contact with the earth and would be completely overwhelmed with such a substrate. Instead, the optimal orchid substrate (€ 7.98 at Amazon *) should be loose and roughly crumbly so that the roots are always well ventilated.

In contrast to some other orchid species, the vigorous cymbidiums need rather large but narrow planters. New shoots are constantly growing from the short rhizomes, which is why regular repotting in larger pots and fresh substrate makes sense. You should move a Cymbidium orchid about every two years, because by then its tubers will certainly already grow over the edge of the pot. The best time to do this is right after flowering; newly purchased plants should also be given a larger container and fresh substrate as soon as possible.

Also make sure that there is good drainage, as cymbidiums are very sensitive to waterlogging. The plant pot absolutely needs a drainage hole in the bottom of the pot, from which excess water can drain. Cover this with pottery shards to protect it from silting up (and thus preventive against clogging). For improved permeability, the substrate can also be mixed with expanded clay, (€ 17.50 at Amazon *) perlite (€ 32.90 at Amazon *) or similar.

You also need a sure instinct for watering the demanding Cymbidium orchids. During the vegetation phase, the plant needs a lot of water, but must not stand permanently wet and should dry out completely between individual waterings. Once the new leaves and onion-like bulbs mature, water them less. This in turn is important for the development of the flower buds.

Keep cymbidiums as humid as possible, especially in summer as well as with specimens standing in the garden or on the balcony, you should reach for the atomizer every day and spray them all around. If the ambient air is too dry, however, the plants are quickly attacked by spider mites.

Cymbidiums should be supplied with a liquid orchid fertilizer about once a week, which you apply together with the irrigation water.

Cymbidium orchids do not need pruning. Only remove that which has withered or withered leaves and otherwise just let the plant grow.

Cymbidium orchids can easily be multiplied by dividing if they are of the appropriate size. Specimens that have at least six bulbs are suitable for this. Pot them out, carefully remove the substrate residue and separate the desired pieces with the help of your fingers and, if necessary, a large, sharp (and clean!) Knife. Each section should have at least one shoot and three older bulbs. Then pot the pieces separately in suitable pots and in fresh substrate.

Unfortunately, the beautiful cymbidiums are very susceptible to pests due to their special care requirements and the associated frequent care errors. Spider mites (the so-called “red spider”), for example, appear when the air in a room is too dry. Leaf suckers such as scale lice, mealybugs and mealybugs as well as thrips attack damaged houseplants in advance, while ants, millipedes and wood lice often cavort in the plants and especially in the substrate in a summer culture outdoors. In addition, snails like to eat the juicy, green leaves. Careful care, adapted to the needs of the species, as well as regular controls can help against a possible pest plague.

Thanks to their long flower stalks and magnificent flowers, Cymbidium orchids are ideal as cut flowers. If you change the water in the vase regularly, the flowers will last up to three weeks. If possible, do not use cold tap water as the orchids are sensitive to lime.

Most dealers offer hybrid forms that are specifically bred to be kept as a houseplant. The original species, however, are mainly cultivated by knowledgeable specialists and are popular collector's items.