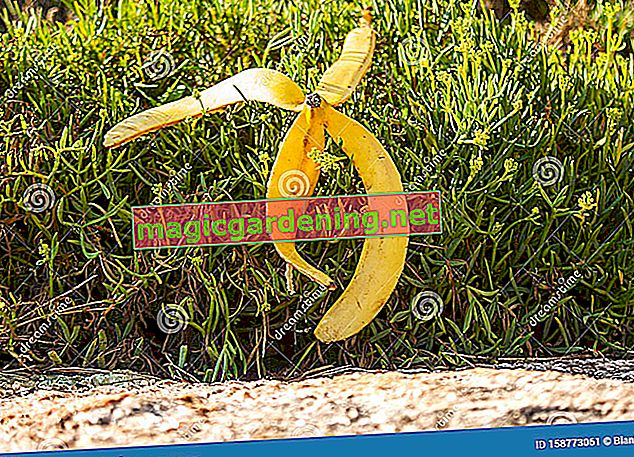 Can banana peel be put on the compost?

Even if the banana is not a local fruit, you can still put the peels on the compost. There are even gardeners who swear by banana peel as fertilizer. The shell contains large amounts of potassium and magnesium.

The often feared slow rotting of the peel can be accelerated by cutting the banana peel into small pieces beforehand.

However, not every banana peel belongs on the compost.

You can also place the bowls directly on flower beds, especially under roses, and don't necessarily have to put them on top of the compost.

You shouldn't compost too large amounts of banana peel and other citrus fruits at once. Then the compost will later contain too high a concentration of individual nutrients.

You shouldn't compost every banana peel

Like many other tropical fruits, the banana is often contaminated with pollutants because it has been sprayed. You should therefore not compost inexpensive bananas from the supermarket, so that you do not later enrich the soil with pesticides.

But you can safely compost bananas that are organic and have not been pretreated.

If you are not sure whether the bananas are contaminated or not, it is better to dispose of them in the household waste. In no case should you use compost made from treated banana peel to fertilize vegetable patches.

Prepare banana peels for the compost

In order for the banana peel to rot quickly, you should cut it into small pieces beforehand.

Scatter a layer of other composting materials over the trays or dig them in a bit in the compost.

Banana peel for roses and other flowering plants

Banana peel is particularly popular with rose gardeners. Roses are high in potassium and magnesium, two nutrients found in the peel.

Experienced gardeners do not compost the banana peel, but cut it very small and put it on the ground under the roses. The pieces are easily hooked into the substrate and rot there over time. Often the bowls are also mixed with coffee grounds, which results in an even higher quality fertilizer.

As they rot, they slowly release the desired nutrients into the soil. Over-fertilization of the roses, which is more common when using mineral fertilizers, can thus be avoided.