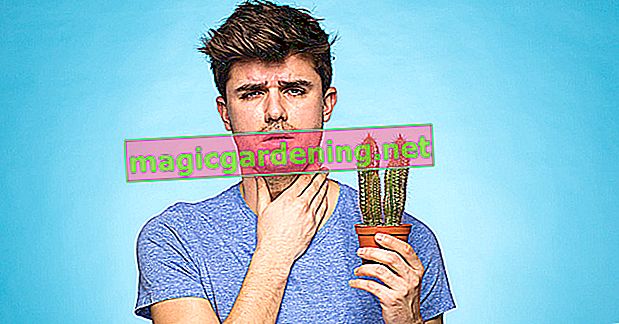 What remedies for ivy are there on the market?

The promises made by manufacturers are great. Ivy is said to be easy and quick to remove with a spray. Chemical agents such as Roundup are offered as well as biological weed killers.

Almost all chemical agents act primarily on the above-ground parts of the plant. They don't eliminate the roots of the ivy. From these, however, new plants develop, so that you can only use chemical means to combat ivy for a short time - and at the same time bring a lot of poison into the garden.

If children play in the garden or if it is also used as a kitchen garden for growing fruit and vegetables, the use of chemical sprays is not allowed.

Chemical agents like Roundup do not work against ivy because they only destroy the foliage above ground. The ivy seems to have died at first. However, it continues to grow underground.

Some remedies like Garlon 4 also work through the root. However, they fight all plants in the vicinity, not just the ivy. In such places the soil is contaminated for a long time.

The only effective way to permanently destroy ivy is by constantly pulling out and cutting the shoots.

In addition, you need to dig up the roots as completely as possible so that the ivy cannot spread further underground. Depending on the root depth, you have to dig up to 60 centimeters deep.

Do not leave cuttings in the garden or put them on the compost. It is best to dispose of ivy via the garbage disposal or a collection point for green waste.

Occasionally it is recommended to tackle the ivy with road salt. Better not to take this advice. The salt not only damages other plants, it also penetrates the groundwater.