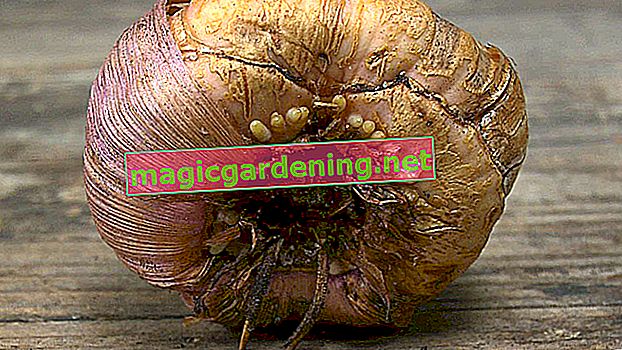 If onions are grown from seeds, only onion green is formed in the first year of cultivation. One growing season is not enough for the plant to create a bulb or even a flower. The formation of a tuber can only be observed in the second year. If the onion also produces a flower, it is a sham umbilicus that can consist of more than 100 individual, stalked flowers.

Prevent the bulb from blooming

Anyone who grows onions in the garden or on the balcony for daily consumption does not want the onions to bloom. Therefore, through breeding, it was achieved that the onion bulbs ripen earlier and that flowers rarely develop.

The onions that are available in stores have undergone a heat treatment after harvesting (three to four weeks of drying at between 30 and 40 degrees). This largely prevents shooting during storage.

Flowering bulbs do not necessarily have to be disposed of. They can be used in several ways:

Grow your own seeds

To do this, the onion blossoms are left to ripen on the plant until the seeds are mature. The seeds are ripe when their capsules turn brown. Now you can harvest the flowers and cut them directly into a bowl on a dry day, as the seeds fall out of their shells during harvest.

The seeds should be kept dry during the winter, at the end of February they can be sown in good potting soil.

As soon as a flower stalk develops on the onion, it can be cut out. The onion then continues to grow normally. The flower can bloom with decorative leaves in the vase.

If an onion flower has already fully opened, the entire onion plant can be removed, because there is no longer any bulb. The power of the plant is used up with the formation of the flower. However, the onion greens can be used in the kitchen as a seasoning for salad. The flower can be eaten as an edible decoration in a salad or on a soup.