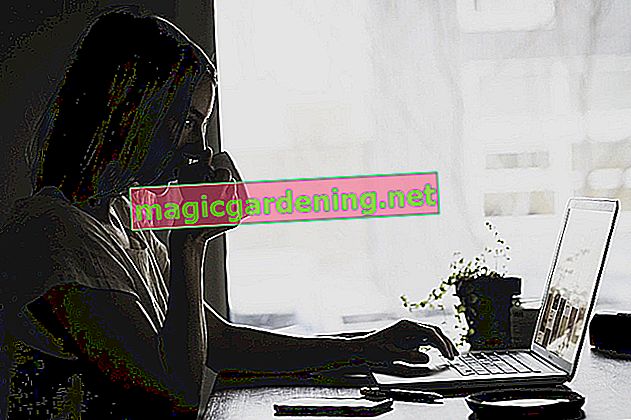 Drive raccoons out of the garden Private individuals are not allowed to specifically fight the raccoon. It is forbidden by law to use live and death traps. If you break this law, you run the risk of being sued for poaching and cruelty to animals. But your own health is also at risk. When cornered, raccoons react aggressively and can transmit rabies through bites. Therefore, you should focus on targeted deterrent measures.

Hunters and conservationists agree that raccoons pose a threat to native biodiversity.

If you've already spotted a raccoon in the garden, check the property every evening. So you can catch the unwanted visitor red-handed on his food forays and he doesn't get the feeling that he can feel safe. If the daily checks are too much effort for you, you will cause disruptions. Raccoons don't like bright lights or water.

When you encounter the animal, light it up with a flashlight. The bright light has a deterrent effect and scares away the raccoons. You can throw pine cones in the direction of the animal without hitting it directly. Water from the garden hose also has a deterrent effect if you spray the raccoon indirectly. A deterrent alternative with an automatic effect is the installation of light sources or water sprinklers with motion detectors.

Devices that emit ultrasound can drive away raccoons. Experts recommend models that can generate a sound pressure of more than 100 decibels and frequencies between 20 and 40 kilohertz. The frequencies cannot be heard by humans, but the raccoon feels intensely disturbed. Since the scope of such devices is very small, you have to use several devices on large properties. With an average price of 30 euros, this variant is not exactly cheap.

Chase away raccoons with home remedies Guard bears have well-developed sensory organs when it comes to smell and hearing. Expensive means from the trade are supposed to drive the raccoon away by using active ingredients with an intense odor. Instead, you can use cheap home remedies that disturb your fine nose. It is important that you try out different methods. Not all animals are equally deterred by the scents.

If the raccoon has discovered an abundant source of food, it prefers to settle near such feeding places. As it takes a lot of effort to get rid of the animals, preventive measures are recommended. Seal entrances to the house and make sure that the animals cannot climb onto the roof.

How the raccoon came to Germany

The original distribution area of ​​the species extends from Central America over the USA to southern Canada. In Central Europe, animals were mainly imported for breeding in order to obtain furs. The first attempts at settlement were made in Hesse in 1934 for hunting purposes.

Today the region around Kassel is the largest and oldest distribution area of ​​the raccoon. North-east of Berlin there is another subpopulation that has been able to develop since 1954 as a result of the animals who fled a fur farm. Today, both sub-populations of these new citizens are connected to one another.

Keep away from the attic Make sure that the raccoon cannot find any access. The small bears are climbing artists and reach the roof via gutters, trees, pillars or corners of houses. Walls with a rough plaster, clinker slabs or bricks offer the animals optimal support for climbing.

How to prepare trees:

Metal plates with a smooth surface and a height of 100 centimeters are recommended for downpipes, walls and pillars. In contrast to wire frames, they interrupt the climbing routes. Barbed wire often acts as an additional climbing aid. Alternatively, you can set up special electric fence systems along the gutters. As soon as a raccoon tries to pull himself up, he gets an uncomfortable electric shock.

Raccoons find refuge in forks of branches, tree hollows or in abandoned badger and fox dens. Search the sheds, garden sheds, and storage areas to spot the animals.

Compost heaps should be covered so that the raccoon cannot access them. A fully enclosed container is more suitable than a frame made of fine-meshed wire and tarpaulin. Do not leave any rubbish bags outside, but deposit them in the garden shed, (7.70 € on Amazon *) garage or storage room. Do not use feeding stations for birds. Even squirrel bird feeders with a folding mechanism are no obstacle for raccoons. Garbage cans can be secured with stretched rubber bands or weighted down with stones. However, raccoons prove to be capable of learning, so that they eventually overcome such obstacles. In Kassel, garbage cans have been fitted with locks for a long time. Fruit trees and bushes should be harvested early.

Raccoons are omnivores and adjust their menu according to the seasonal offer. Make sure that there are no nuts, fruits, meat and vegetable scraps in your garden. Cover garden ponds with fish, because these too will be robbed.

How to spot raccoon tracks

Eaten plants in the bed, fallen flower pots and tattered chair cushions are not a clear indication of raccoons. Scatter a trail of sand around potential feeding grounds, flower beds, and compost heaps. The next day, check for paw prints on the sand.

The mammals belong to the omnivores. They prefer easy-to-capture food, which is why they are increasingly common in settlement areas. Fruit and nut trees in suburbs provide a welcome source of food. Public rubbish bins or garbage cans and compost heaps on private property are attractive. Undisturbed attics are an ideal place to retreat, hibernate and raise young ones.

What do raccoons do during the day?

Raccoons are crepuscular and nocturnal, so they spend the day in hard-to-reach niches. In nature, tree and earth caves or crevices and abandoned buildings provide an ideal retreat. In contrast, the small bears use abandoned buildings, stables and barns in settlement areas to rest. Garages, basements, attics and sewage systems are also visited.

What harm can raccoons do? 43 percent of climbers prefer buildings as a retreat, while 39 percent switch to tree hollows. Young raccoons between eight and ten weeks old are particularly curious and explore their surroundings very carefully. It is not uncommon for the play instinct to come through, so that the animals can destroy the entire roof truss insulation.

Urine and feces not only cause odor nuisance, but can also be a breeding ground for pathogens. Consequential damage is not uncommon when shifted roof tiles and metal sheets go undetected.

How do raccoons feed?

The animals belong to the group of predators and use their front paws to search for food. They prefer animal food in the spring to replenish the fat reserves they have depleted in the winter. Earthworms, insects and snails as well as young birds and mice make up the majority of their diet.

During the summer and autumn months, the animals resort to plant-based food and collect seeds and fruits. In the winter months they feed on their fat deposits and on warmer days they go to non-frozen waters. Raccoons need 200 to 400 grams of food per day.

Studies of the raccoon population in Hesse showed that around three quarters of the animals carried the raccoon roundworm. This parasite could not be detected in animals in Brandenburg and in the Harz Mountains. Therefore, there is an increased risk of people being infected with roundworms, mainly in the region around Kassel.

There are few raccoons that have been found to be rabies. Sick animals showed passive and disinterested behavior. They usually retreat to well-protected hiding places in order to die undisturbed there. Curious raccoons foraging for food are generally not suspicious of rabies. They can bite when they feel pressured.